One-way system changes in the city centre in 2009 triggered FWT’s involvement in street-based information, with publicity at all city centre bus stops. The changeover went smoothly and the subsequent introduction of a radically new city-centre-wide bus stop lettering systems, with all-embracing boarding posters and stop-specific timetables for every bus stop followed. (See earlier News items from 2011.) 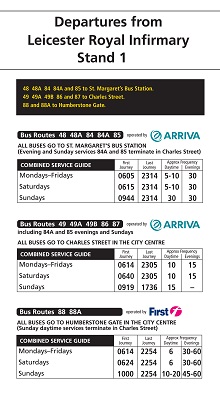 With this now having been in place for three years, and kept up-to-date, we were engage to rollout timetables to the same high quality in their LSTF area. Up to about 580 bus stops will be equipped and this has been broken down into nine areas for a manageable phased rollout. This is now well under way.

Find out more about the four Ds and the 8-Second Rule.